A month ago there was the first ever SRECon in Europe. It got together lots of SRE-like engineers (basically the people who are re­spon­si­ble for the software that is live, running in production) from Google (the host of the event), Facebook, Etsy, Splunk, SoundCloud and others.  Because I'm an SRE, I had the op­por­tu­ni­ty to go there.  With this occasion, I stayed two more days to have the chance to see Ireland and Dublin a bit more (yes, I know I'm terribly late with this post).

The two workshops that I enjoyed most were drumroll about statistics (by Heinrich Hartmann) and about machine learning (by Adam Oliner) and the pre­sen­ta­tion from Etsy about Kale, their anomaly detection system. Who could have guessed? But of course, there were plenty of other in­ter­est­ing pre­sen­ta­tions. There was one about planned in­fra­struc­ture outages, which did an analysis of the way the London Un­der­ground renovated King's Crossing (and how they screwed up big time on Christmas). There was the pre­sen­ta­tion from Theo Schloss­na­gle, from Circonus, about how all software in general is bad, in particular RabbitMQ. Dave O'Connor from Google talked about ourselves, who have bad machinery, that handles in­tr­errupts very badly, and how to deal with pages, while still being able to do your project work (this is something I have problems with as well).

It was awesome to meet lots of other people who have similar jobs as me, to hear them talking about the scale they are working on (for example, load-balancing at Facebook, with their 1 billion users, or providing search results under 60 ms almost everywhere in the world at Algolia) and to see that people are doing great things in other places too.

The last pre­sen­ta­tion was one of the most scary ones. It was from an Irish lawyer, who talked about the Safe Harbor provisions and how the EU courts might overturn it for the US. If that happens, lots of SREs will be muuuuch busier suddenly.

Having visited Dublin a week after London, I made lots of com­par­isons to it. And I liked Dublin more. It's a much smaller city, with a population of only 526.000, and it's also much "lower". The tallest storeyed building in Dublin, which is also the second tallest building in the Republic of Ireland, is only 67 m tall, and it happens to be one of the Google offices (so you have an awesome view :D). In general you don't see as many sky­scrap­ers as in London, most buildings having only 2 or 3 floors.

It turns out that londoners behaviour in regards to pedestrian red light crossing is moderate, compared to what is normal in Dublin: red light, look before you walk, yellow light, walk faster, green light, who cares, it's the shortest of the three anyways. Another thing that I noticed is that the behaviour here regarding turning the other way (to the left in most places, to the right in UK and Ireland) is different and leads to what seemed to me as a deadlock (or almost) in in­ter­sec­tions.

One of the things that make Ireland more in­ter­est­ing are all the remnants of the Gaelic culture. Most signs are written both in English and in Irish Gaelic, but not all of them. The Gaelic influences can sometimes be seen in the ar­chi­tec­tur­al elements as well as in general dec­o­ra­tions that are found in buildings.

I found the style of many statues to be... in­ter­est­ing. Some of them seemed to be quite rough. 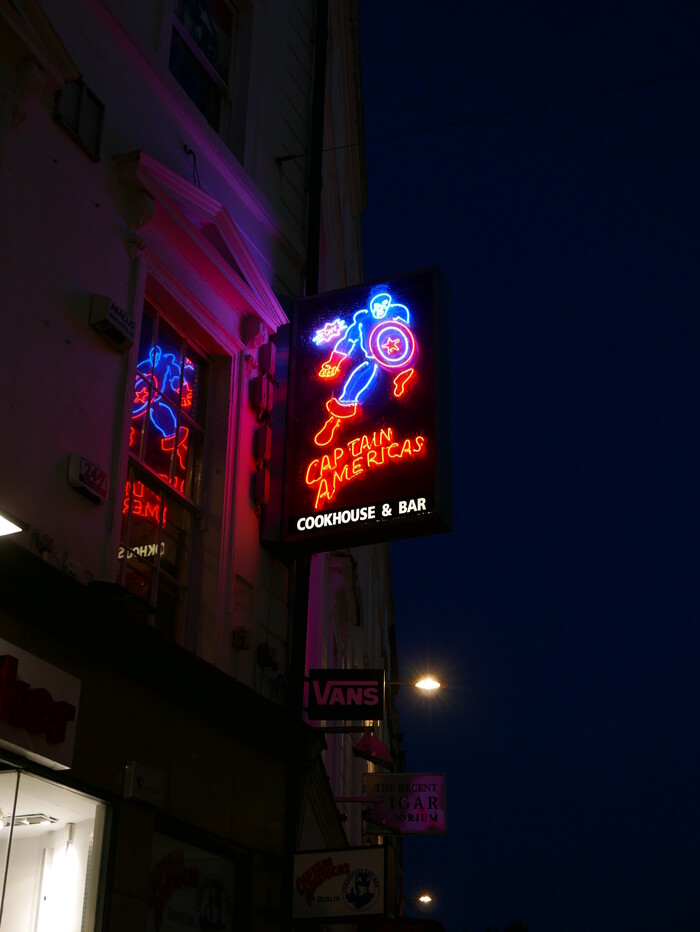 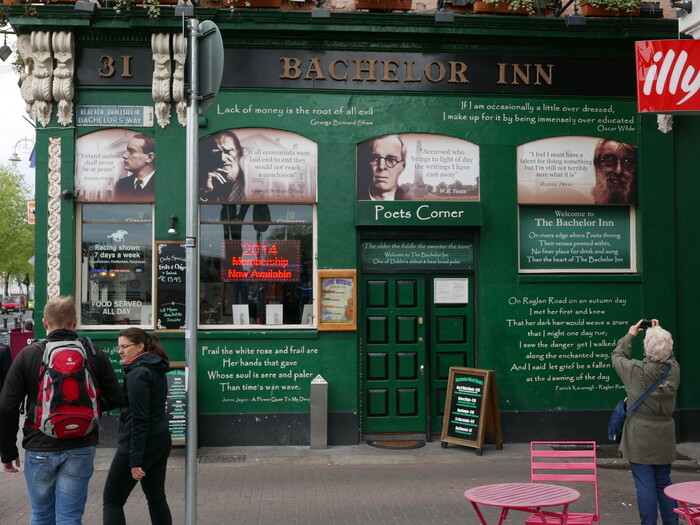 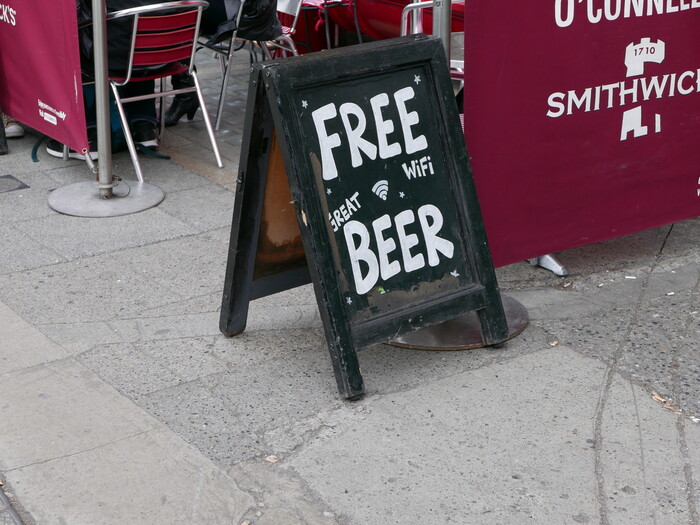 But with names, the Irish are very creative. The city is full of funnily named bars and restau­rants. 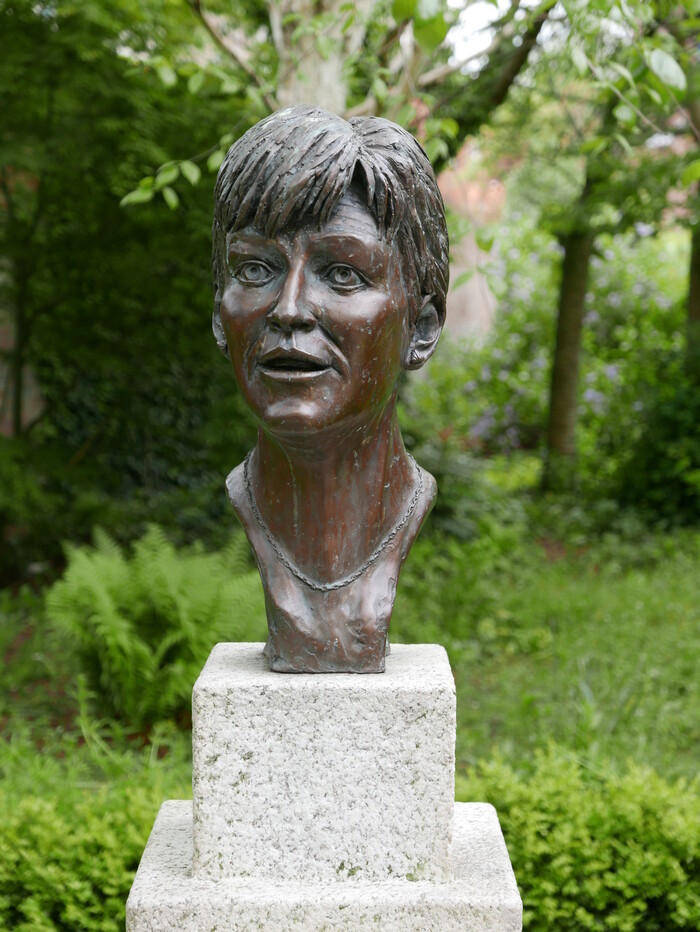 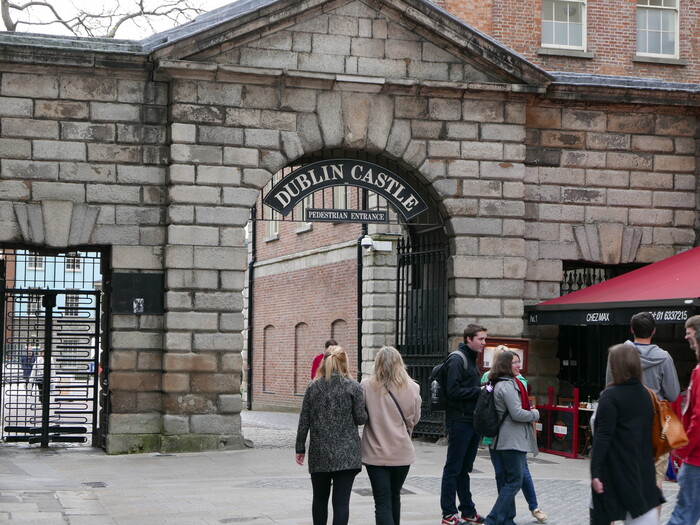 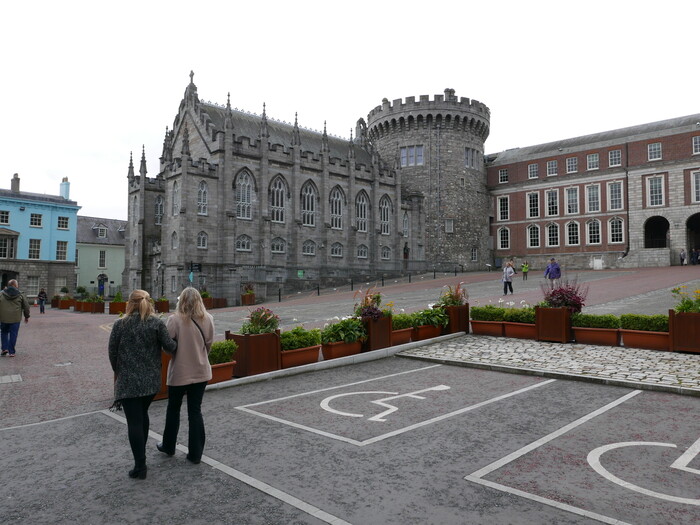 On Sunday, after church, I visited some of the older parts of the city: Dublin Castle and Trinity College. In Dublin Castle, I visited the Chester Beatty Library. He was a famous col­lec­tion­er of old man­u­scripts and the library full of some of the oldest Christian, Muslim and Chinese books, starting from the first centuries. Trinity College is a more than 400 year old university. I would have liked to see the Book of Kells, which is housed there, but it was closed at that time :( 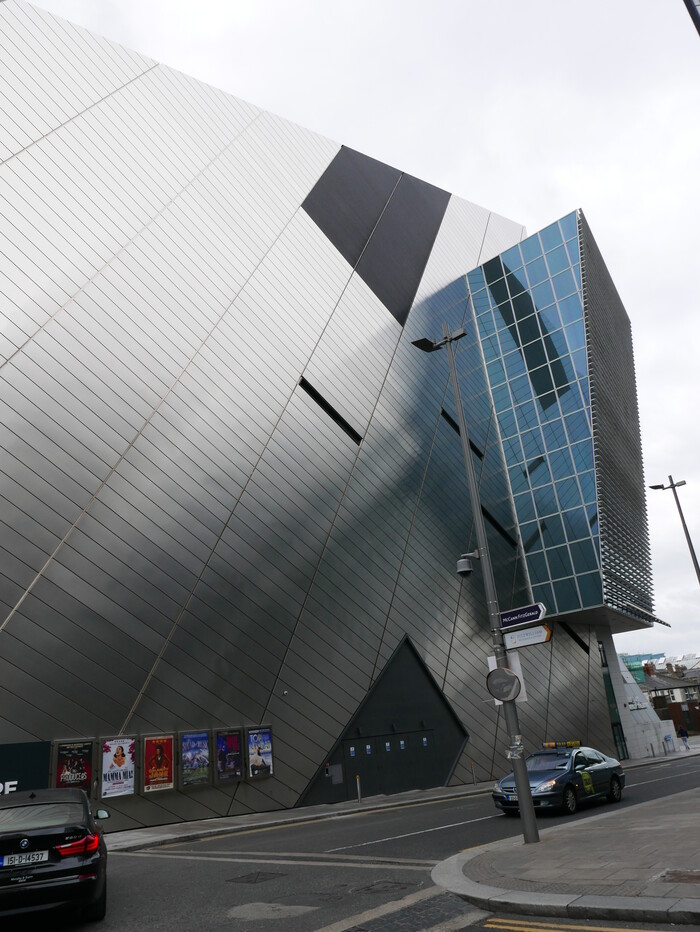 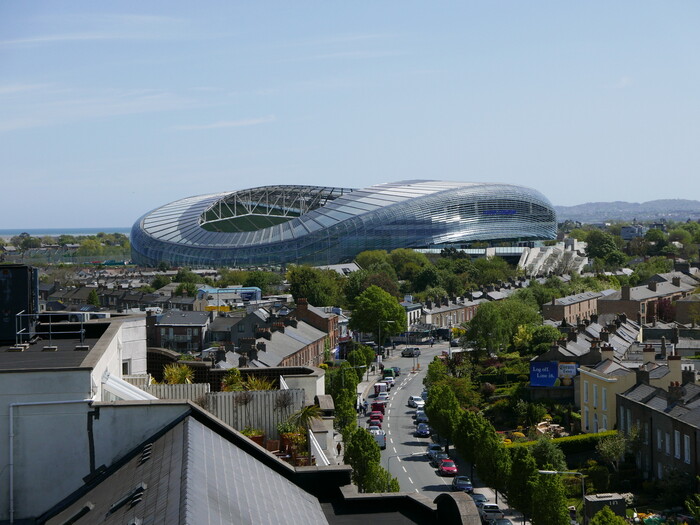 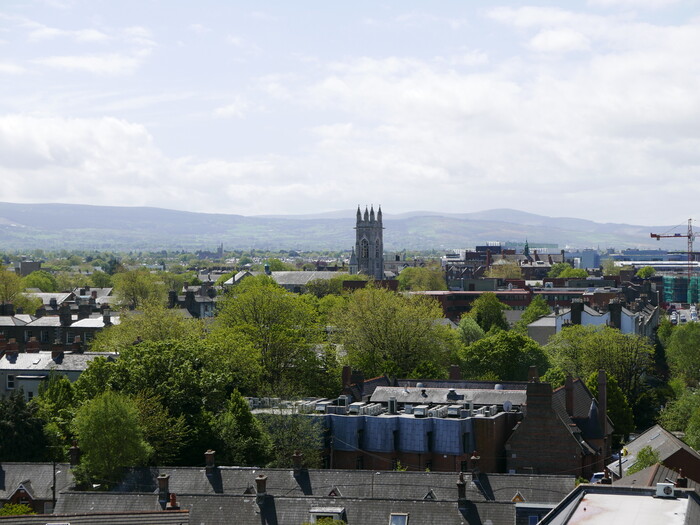 I want to mention herbstreet, an excellent place for having Belgian Waffles for brunch and The Counter, a great burger place, where you have lots of varieties for all components of a burger.

On Saturday I went with a colleague on a hike on some "moun­tain­s". The area was beautiful. I enjoyed it very much, even though the weather changed five times in one day, oca­sion­al­ly raining and being very windy. 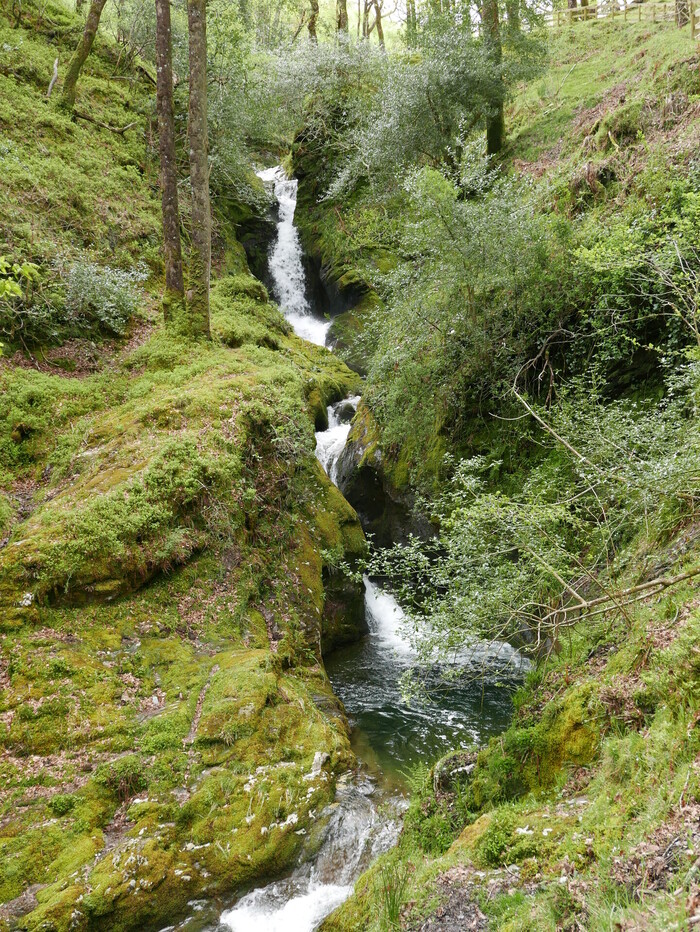 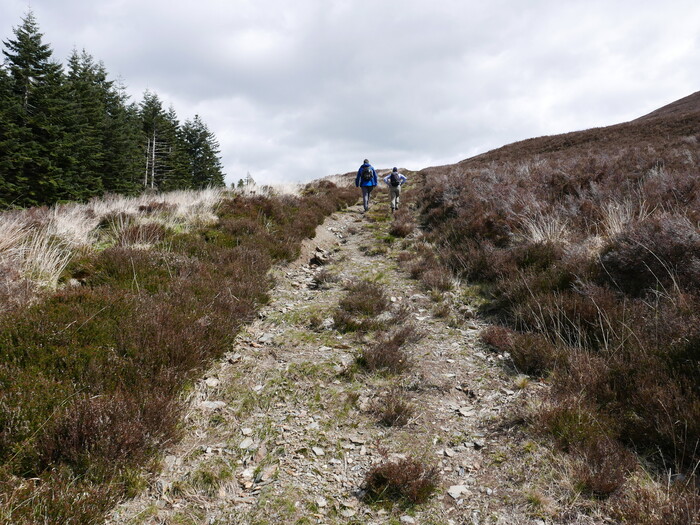 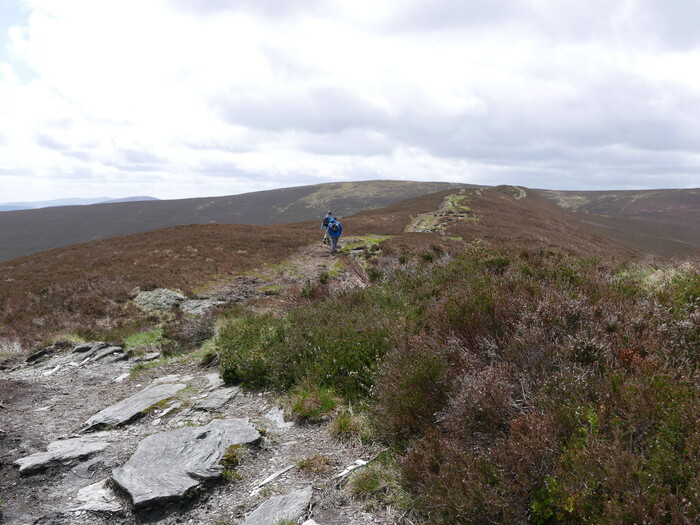 Overall, I liked Dublin more than London, both the scenery and the feel of the city, but the weather killed me. I don't like cold and my Irish friends told me that 20 degrees is a reason to celebrate summer there :( 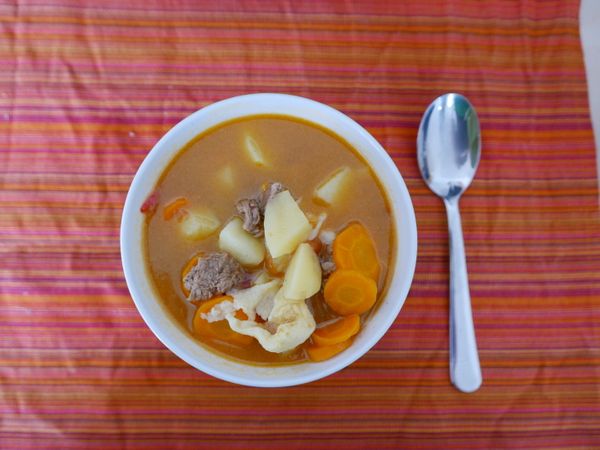 After spending a long time in the fatty, sugary, GMO, antibiotic-ladden land of the USA, the little daco-hungarian decided to make himself some gulyas, for the first time ever. Here 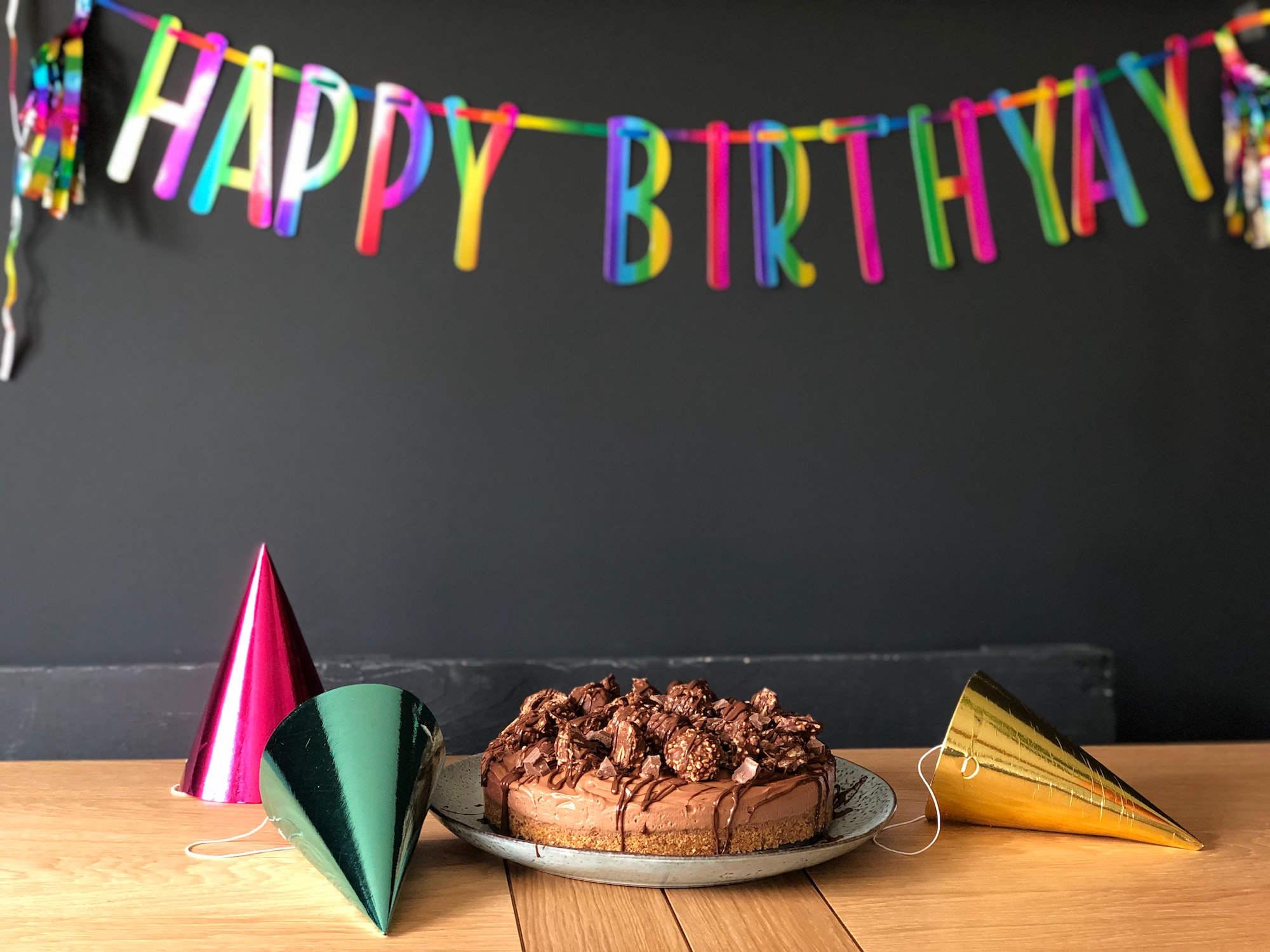 5 years ago, on this day, I started this blog on Wordpress.com. And here I am, half a decade later, 2^8 posts later. Let me tell you how